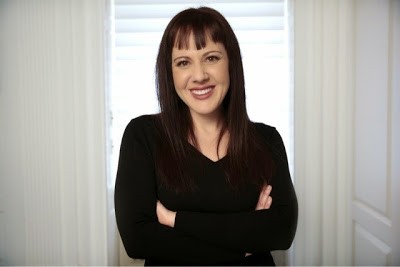 If you know me by now, you know I loooove a great Q&A. Today’s Q&A excites me more than most because it’s with a lovely friend of mine. One I had actually lost touch with once she moved away to the big city! I’ve known award-winning author Maya Sloan since my beach wedding, and couldn’t stop squealing when I heard the news she was the ghostwriter of Rebels: City of Indra: The Story of Lex and Livia, the book by Kendall and Kylie Jenner, published this past June.

So, of course, Maya, being the awesome, fun-loving free spirit she is (she calls me HON and I love it!), agreed to let me in on some of time spent with the Jenner sisters. And keep reading to see what she says about her next book client…juicy! Can’t. Wait. Congrats a mil, Maya, and thanks for the Q&A. Hon!
I Heart Heels: How did you get involved with the Jenner girls?
Maya Sloan: The project came to me through the publishing company Simon & Schuster. I’d already done several books for them, both my own novel and co-author/ghostwriting projects. When I heard the Jenner sisters were doing a sci-fi dystopian book, I got excited!
The obvious choice for them would be a book about two young reality stars, the fashion world, Hollywood teenagers…instead, they chose something completely unexpected. That choice alone made me love Kylie and Kendall right away. They are their own people, with their own unique voices. It’s easy to put labels on those in the public eye, but I found them to be their own people…both were charming, funny and fiercely opinionated. They were meeting with several writers, and I was one of them. I guess I passed the test and got the gig.

“I found them to be their own people…both were charming, funny and fiercely opinionated.” — author Maya Sloan, on Kylie and Kendall Jenner

IHH: You attended fashion week with the sisters. Was it hysteria being with them throughout it?
MS: Before meeting the girls, I truly knew nothing about the [fashion] industry. I admired the innovation and artistry of great designers, but never imagined I’d see a show…and seriously, it was a blast. I saw Kylie walk in Abbey Dawn, looking totally badass rocker chick in spiked leather and hanging garters. Then I saw Kendall in Michael Kuluva Tumbler and Tipsy, which was a wild show. This was before Kendall really broke out as a model, but you could already see that’s where she was headed. She’s got an innate elegance to her. Then my husband and I saw them both in Sherri Hill at Trump Tower. Hardcore sparkles, princess dresses. Watching them stride down the runway holding hands…they were so cute together.  I couldn’t help but cheer for them, which, I now know, is not runway protocol. Everyone is supposed to look jaded and unimpressed at fashion shows, right?  And there I am, catcalling. And Kylie kind of chuckles under her breath…I’m sure no one saw it but me.
Afterwards she said, “Maya, that was you who was yelling, right?” And I’m all embarrassed, saying, “Yeah, sorry about that.” And she just flashes this grin and says, “No, it was great!”
IHH: How long did it take to write Rebels with them…and what was going through your head when you landed the offer.
MS: It took two years. And yeah, it was…surreal. To say the least. Especially since I was supposed to be a silent ghostwriter and then my name was released. My brother emailed and said, “Have you Googled yourself lately?” I did and was on the Web two million times. I thought, “Well, things are going to be different now. Better get used to it.”

IHH: Did you ever travel to L.A. to meet the girls or were meetings in NY? What’s Kris like?
MS: I saw the girls many times in NY and there was a lot of Skyping. Kris wasn’t really involved…it was all Kylie and Kendall. But I did get to meet her and Bruce on separate occasions. Her skin was amazing. Flawless. I couldn’t stop staring at her and wondering if she actually had pores.
IHH: Will you continue to talk to the Jenner girls after the book frenzy dies down?
MS: Already have…seen both of them, and their manager several times. I’m really fond of them…can’t believe how much they’ve grown up in the time I’ve known them. I’ve really seen them evolve from teenagers into strong young women.
IHH: What do you think of selfies?
MS: Wish I was better at them! Think it takes practice. And knowing your good angles. Not that it matters much for a writer. No one cares what we look like (I’m thankful for that!).
IHH: In your past life, you were a (celebrity) nanny, yes?
MS: Yes, I was a celebrity nanny…years ago! I babysat for Harrison Ford’s grandson Ethan, Joel Coen and Francis McDormand’s son Pedro, Jose Canseco’s daughter Josie…a bunch of others. But the family I stayed with for many years were George and Ann Lopez. Unfortunately, they aren’t together now…but they were the best Hollywood has to offer. They treated me like family. I’m eternally grateful to them. And their daughter, Mayan…she was just the most creative, exceptional little girl in the universe.
IHH: Any hints at all on your next (juicy) client. Celebrity?!
MS: I’m sworn to secrecy!  But yes, it is a celebrity…and double yes to the juicy part!
Love Shoes?

Leave a Reply to Latrice Close