​ Whiny Wednesday: When Baby's Not Ready To Wean - I Heart Heels

Whiny Wednesday: When Baby’s Not Ready To Wean 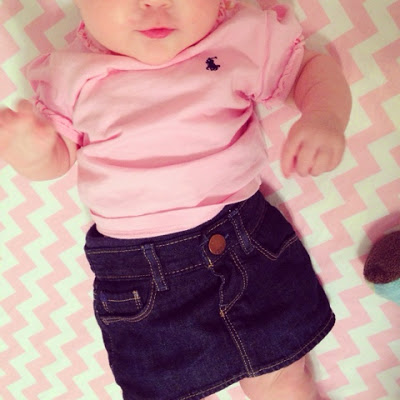 In case you missed this on my Instagram feed (@iheartheels) yesterday, here’s baby L and her All-American girl look. 😉
She’s a sweeeeeeet thing, y’all.
So much that she’s pretty attached to me right now. I’m sorta dreading going to NY for fashion week in about five weeks because I know it’s going to be hard on both of us. I know I’ll have fun once I’m gone, but just thinking about it makes my stomach turn. I left little C for fashion week at nine months, but she’s only going to be seven. And…she’s still nursing.
Remember how I told you a few weeks ago I was nervous about what to do? I even posted on Instagram to get mom tips on how to save enough breastmilk to leave for her while I’m gone. I got soooo many amazing responses, so thank you.
At that time, I was EBF (exclusively breastfeeding). A few weeks ago, I finally (and through gritted teeth) gave her a few ounces of formula. Not because I wanted to, really. If I was going to pump enough to leave during NY, I had to. I just didn’t have the supply (or honestly the energy…I would’ve been a crazy person) to feed and pump enough milk for three whole days. So, I gave her a 4-ounce formula bottle for a week, then added a second, and pumped and pumped. After a couple weeks, I had saved up enough milk to leave (accounting for two formula bottles and solids, which I’ll introduce soon). Perfect.
So then I added yet another couple in the middle of the night and the morning, selfishly hoping that by adding more she’d sleep more…and maybe through the night! Pretty soon I’d work up to half formula, half breastmilk and if she continued to do ok, I’d just wean before my trip and not have to worry about dragging my pump along to NY or transitioning back when I returned. Guess what? It never felt right. And baby L? She didn’t like that plan, either.
The more and more formula I added, the fussier (and gassier) she became. She didn’t sleep as well at night or nap as well during the day. I switched formula not once, but twice and was beginning to stress out. I’d give her formula and she’d fuss through the whole bottle. Formula feeding was actually harder than breastfeeding. One night she cried so hard from tummy pains, so I rubbed her tummy and she completely stopped. It was like magic. Meanwhile, my stomach was in knots. Mom intuition kicked in. Ya know, the feeling I’d had all along. It just wasn’t (and isn’t) time for either of us to quit. Period.
So, what did I do? Well, for one, I never stopped pumping, so saved an entire month’s worth of breastmilk. I added back two more nursing feeds (yes, so I get to feed her all night long again until she’s ready to stop) and kept the other two formula feeds, but am now mixing them with half breastmilk. So essentially she’s now only getting 4 oz of formula each day. Her tummy is worlds better, she’s a much happier baby and I can breathe a sigh of relief knowing I’ve made the right choice for us.
Who knows if I’ll make it very long after I return from NY. It might be time then. But right now just don’t feel that way, and I’m glad I listened to baby L’s cues.
Nursing is so individual to each mom and baby, that being in tune with each other is the most important thing. Besides, if you read my last post, these moments don’t last long. And my pump can easily fit in my luggage. I’ll just have to squeeze it in between shoe shopping. 😉
Love Shoes?