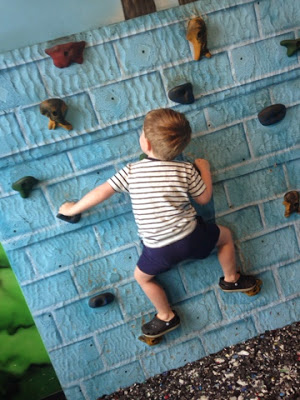 I’ve been SO smitten with baby girl and her giggles lately. I’m just adoring the 6-month age. How did she get so big?! I’m trying to really, really enjoy her and not take for granted a single moment because now that she’s my second, I know that in just a few years I’ll wanna freeze time. I’ll wanna hold her sweet baby rolls in my arms again. I’ll want those precious open-mouth kisses and to see her smile at every little thing I say. I’ll wanna watch her take her first bite…her first step…her first word.
You know where all of this is coming from, right? It’s not so much about baby L. little C starts preschool in just a couple more weeks and my heart is exploding. Up until now I’ve been SO excited, but lately I’ve gotten quite sad. It’s. So. Crazy. I didn’t know this would happen but I’m crushed that he’s starting preschool because that means never again will he go to Mother’s Day Out while I “take a break.” He won’t be home more days than not, just heading to the store or to get ice cream with me. We won’t have a PJ day during the week. Ever again. I know it’s going to be so good for him, but can we just rewind time? Back to when I was so darn mad that he knocked his Legos over and threw a huge fit because I wouldn’t put them back together. Or back to us lying in bed for a nap, and he never would close his eyes to sleep. Back to me being so frustrated he wouldn’t finish his peas or let me leave the room for just five minutes.
I want those moments back.
And so mamas with only one baby just know this. It won’t always be so hard. You’re going to miss every gosh darn second of it, in fact. Someday that tiny thing will go to preschool and get BIG and say he doesn’t need help with something and walk away from into school without even looking back. You’ll cry like me, but you’ll realize, too. That life isn’t about anything else really. It’s all of the hidden moments that matter. The ones you pass over at the time, and look back on later.
So basically I’m saying cherish your babies right this very minute. Because they won’t always be that little.
D. told me that one day I’ll look back on my entire life and realize that staying home with the kids was the best thing I ever did. Funny enough, I’ve already realized that.
Love Shoes?

I Tried Yoga Yesterday… Whiny Wednesday: When Baby’s Not Ready To Wean