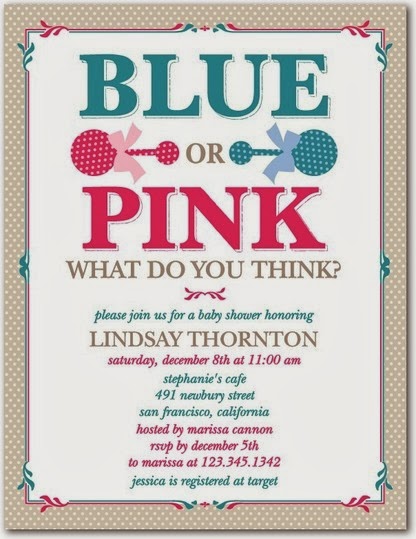 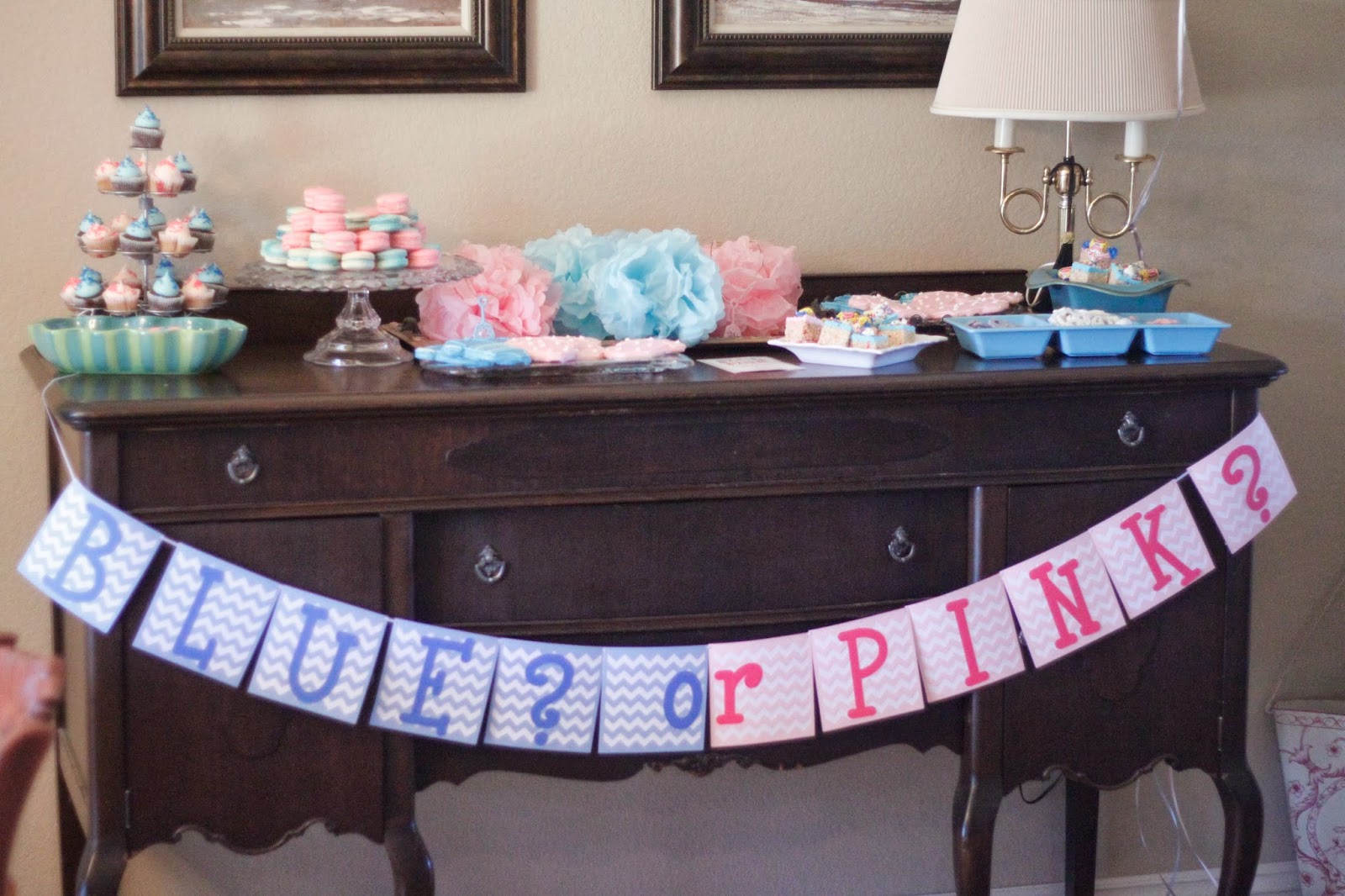 I just love to throw a good party! Once I start, I can’t stop. I truly think it’s my second calling. It’s just that it’s such a great excuse for everyone to be HAPPY…and with all the terrible things in the world today, a party is something we all need once and awhile. This past weekend we had our gender reveal party at my sister’s house, and it was soooo much fun! We didn’t even start planning it until a few weeks beforehand, and sometimes I think that’s when the best things come together, ya know?

I chose the “blue or pink” invite above from Tiny Prints, and this is what decided the party’s theme. You know me, I love a good, cheesy rhyme. I thought about going online to print invites on a printer, but I’ve had such amazing experiences with Tiny Prints for all things announcements and invites, I just decided to work with them again and everything turned out perfect (thanks for the invites, Tiny Prints…mwah!). What do you think…do you like them?

So when I got to G’s house (that’s my sis), I realized she had the perfect buffet for the sweet treat bar. I draped a “blue or pink” banner (with chevron!) across it that I found on Etsy (new addiction, by the way) and topped it with all of my fav blue and pink sweet treats. YUM.

The treats below literally were! Treathouse, located in New York, was nice enough to ship us two dozen of their birthday cake (blue) and bubble gum (pink) rice crispy treats. Aren’t they just the most adorable things you’ve ever seen? ! I discovered them via fashion week and was hooked. They’re the size of about three bites and so, freaking tasty. They were literally the first sweets gone! 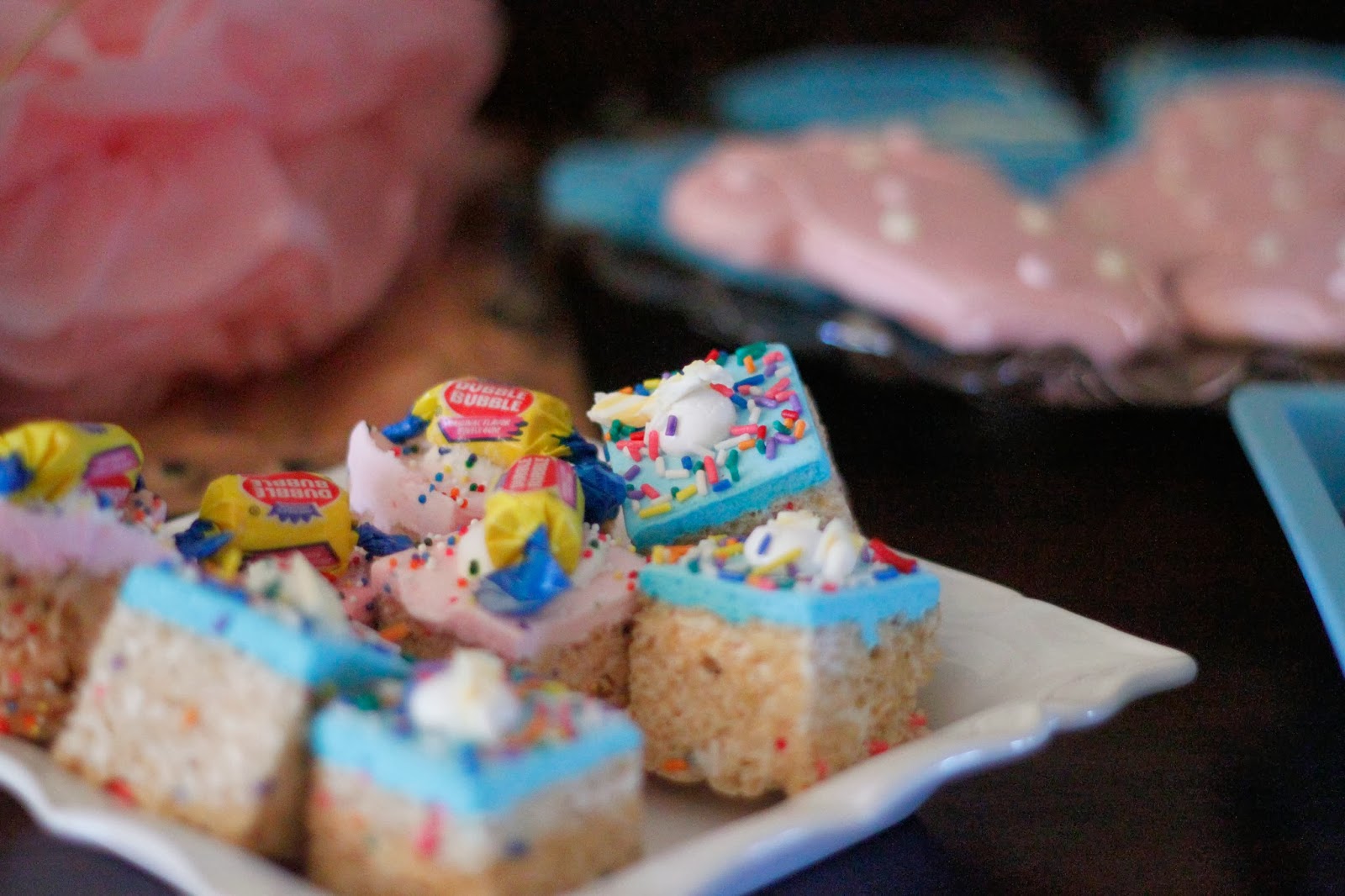 The sugar-laden display also included a cake stand topped with the most beautiful macarons…le swoon. I’m such a macaron fan, so when I found out Dana’s Bakery could ship me their “It’s a Boy” and “It’s a Girl” macarons straight from New York, I nearly fainted. What a nice addition to the party, eh? Not only do they display beautifully, these sweets are gluten free and made from almond flour. I’m still eating what few leftovers there were and let me tell you, I don’t hate that. Of all the sweets, these were probably my favorite. (the pink ones have an amazing cheesecake flavor inside of them…quite addictive!)

Ok, now award for the CUTEST dessert at the party? The onesie sugar cookies provided by Rick’s Bakery in Fayetteville. I squealed several times over when I opened the box and saw them. I found the idea on Pinterest and sent them the image (blue/stripes for boy; pink/polka dots for girl), along with a special cookie cutter I found on Etsy. Rick’s did an amazing job with these (this kind of thing is their forte)…and in such a quick turnaround. I can’t thank them enough! And now if you want your own onesies, they have just the cookie cooker. 🙂

Last, but certainly not least, Bliss Cupcake Cafe in Rogers provided the blue and pink mini cupcakes, and they were by far little C’s fav! (ahem, and my sister’s) These were a great idea because they were the perfect size for all of the little ones running around to handle. I already had the perfect cupcake stand I had bought at Hobby Lobby when little C. turned just one, so I was able to get more use out of it. As little C said, “the frosting is my favorite part!” (probably with more than one exclamation mark) 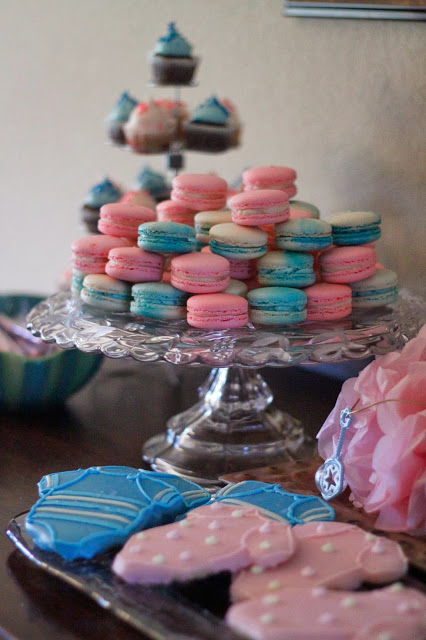 Most people mingled outside (since there were lots of kids there and it was beautiful weather), but I did decorate a table with a chevron cloth from Hancock’s and I made a few blue and pink “poofs” I bought at Michael’s. Look at me, all crafty and such! 🙂 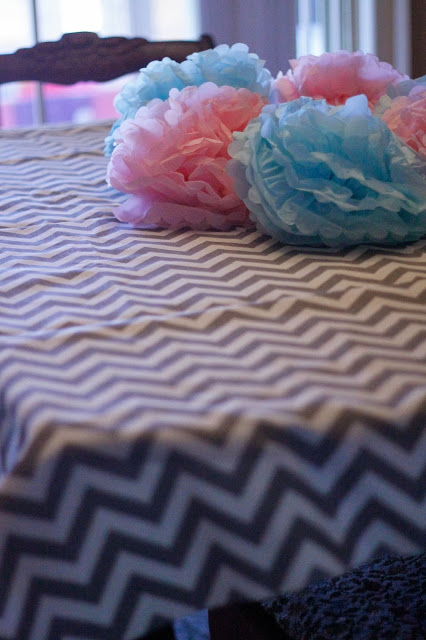 And can you believe I found these cute favor boxes at The Dollar Tree?! Blush. Yep, and I’m still in love with them. I also found (randomly on the end of a Target aisle!) the perfect “thank you” stickers to put on them…it was fate. And I filled the boxes with none other than blue and pink Hershey’s kisses. 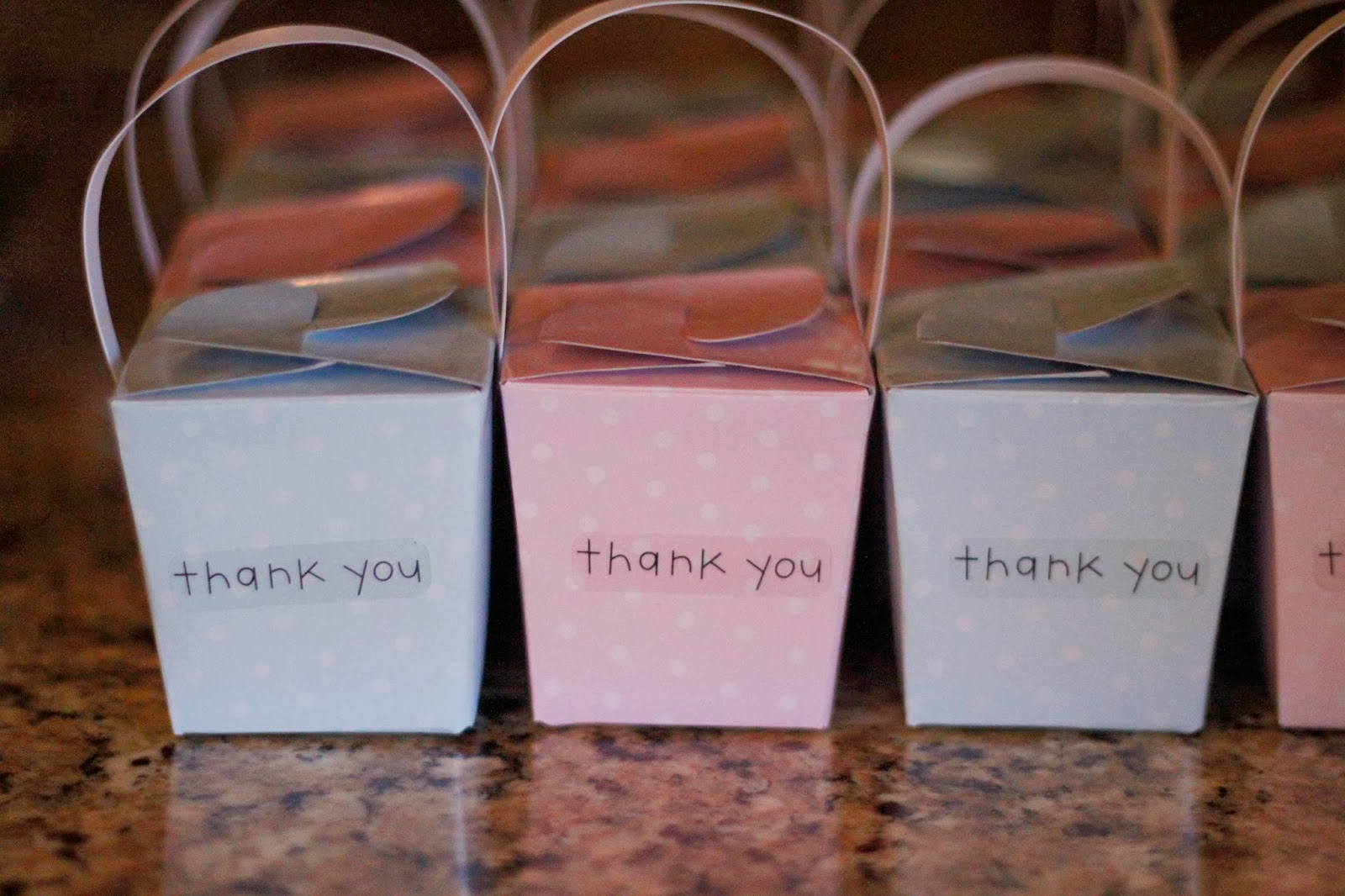 OH YEAH, and in case you missed the news yesterday…it’s a GIRL! 🙂 Here’s D. and me opening the big reveal box I decorated with wrapping paper, letting the pink balloons fly (did I mention at one point we rode in the car with 36 balloons? yeah, prob not a good idea…but funny!).

It was a great day all in all, and I can’t believe I kept the results a secret for FOUR whole days…even from my parents. In the end, it was all worth it to see everyone’s surprised faces when we opened that box. I wouldn’t trade the day with our closest friends and family for anything. Love you all!!!!

P.S. Forgot to mention, I bought “team blue” and “team pink” stickers from Zazzle.com for everyone to wear, so that made the party even more fun as everyone got to choose a side. Most people chose “team blue,” so that made the reveal amazing. 🙂 For even more photos, visit my instagram @iheartheels.

So what do you think? Were you surprised? 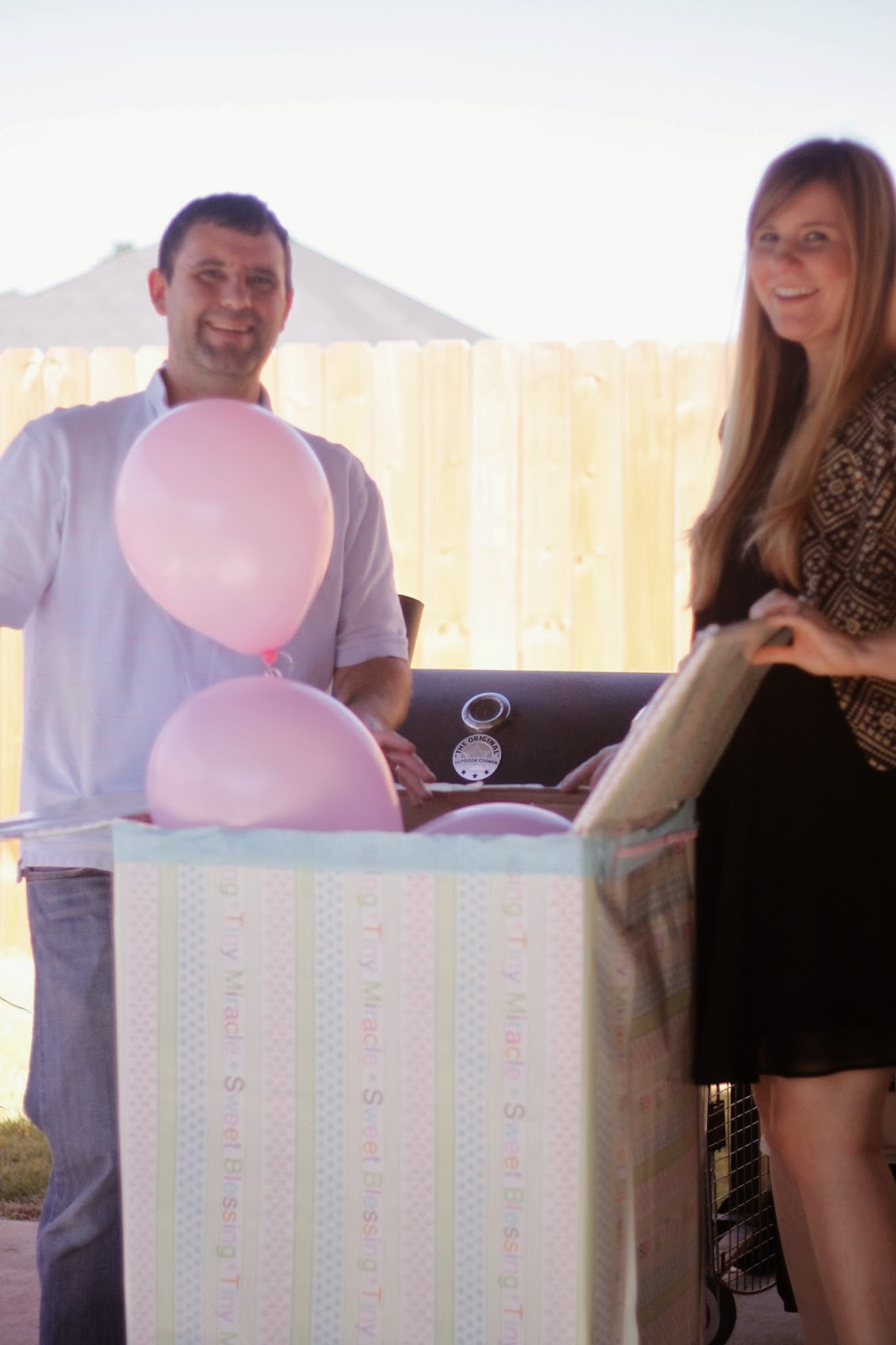 Breaking News! It’s A… Most Popular Shoe Designs for Women