​ Crazy About Tiffany's: A Sparkling Documentary - I Heart Heels

Crazy About Tiffany’s: A Sparkling Documentary 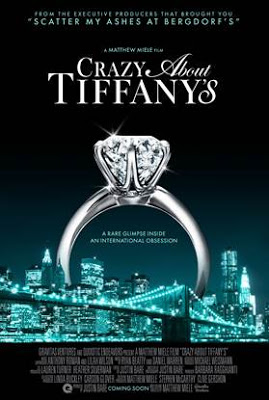 I’m squealing with delight about this fashion documentary coming out February 19…eeeeeek! Crazy About Tiffany’s, written and directed by Matthew Miele (“Scatter My Ashes at Bergdorf’s”) is a film allllll about that simple little New York City jewelry store that opened its doors in 1837 and has continued to steal all of our hearts with a little blue box ever since. Not sure I’m familiar with anyone who doesn’t hold a special place in their hearts for Tiffany & Co. Am I right? Are you as crazy about Tiffany & Co. as I am??

Crazy About Tiffany’s (which I got to watch early and loved!) features candid highlights of the brand’s amazing history, its impact on pop culture and unique insights from celebrities such as Jessica Biel, Katie Couric and stylists Rachel Zoe and Kate Young.

Gravitas Ventures will release the film in the U.S. and Canada in select theaters and on demand on February 19, 2016. There are also over 50 markets where you can watch the film online via Tugg!

I was lucky enough to catch up with director Matthew Miele the other day to ask him a few questions about the film. Enjoy!

I Heart Heels: What fascinates you about Tiffany’s the most?
Matthew Miele: Tiffany & Co. has a pop culture reach that’s primarily unknown by the general public. They influence so much in our culture beyond jewelry. Take sports, for instance. Tiffany & Co. makes most of the major trophies celebrating the pinnacle achievement in each sport, including the Super Bowl trophy. But even beyond that, one of the most iconic logos in the world, the Yankees symbol, was an original Tiffany’s design dating back to the late 19th century.

IHH: What is it that draws you to fashion films in particular?
MM: Obviously there is an audience for this type of content. But it’s not fashion in particular that I’m drawn to. I’m drawn to iconic subjects. Bergdorf Goodman and Tiffany & Co., my first two subjects in the documentary world, are fashion-oriented, but iconic as well. My next few projects will also be on iconic subjects, but outside of the fashion world.

IHH: How long were your days shooting this film?
MM: We shot this film over the course of two years, each day varying. Some days were strictly research in the archives, other days we had a full day of interviews, and others we documented how the jewelry was created. Still other days, we traveled the globe – to China for instance – to document the travel of the famous Tiffany diamond to various cultures.

IHH: Is there a behind-the-scenes moment that you can share?
MM: Since I was granted access few others have seen before, I was happy to include all of it in the film. So I encourage any fan of Tiffany & Co. to watch the film. It really allows a rare glimpse.

IHH: What was it like working with this cast? Who would you say is the “craziest” about Tiffany’s?
MM: I would say that the actress Jennifer Tilly really might be the “craziest.” Not that she is crazy, but because she is passionate about jewelry. She truly knows her stuff and has the collection to prove it. She was definitely inspired by the likes of Elizabeth Taylor and her collection, which was equally fabulous.