​ Whiny Wednesday: A to Z, The Alphabet Abacus - I Heart Heels

Whiny Wednesday: A to Z, The Alphabet Abacus 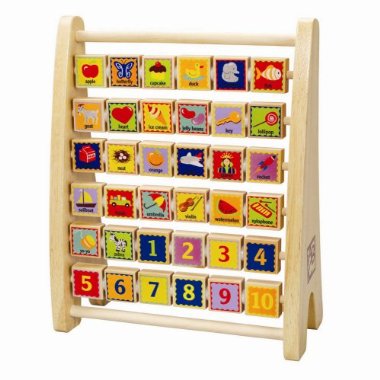 If ever there was a toy little C. fell in love with, this one is it. The Alphabet Abacus ($24.99) by Educo. He totes this thing all over the house (and hides it, of course!) like it’s his lovey. He’s owned it for about a month (we bought it while on vacation), and it seems as new as ever. The best is after searching for anything bad about the brand I could possibly find, I turned up – nothing. (with the exception of maybe two toys from five years ago that made the healthystuff.org “bad” list as I call it) The abacus is wooden with both photos and numbers, and he’s in such a learning phase right now, he loves pointing at everything and recognizing things like “duck” and “sailboat.” (We have a bunch of model sailboats in our former guestroom/now little C.’s “big boy” room, that he absolutely loves to look at every chance he gets.)
This toy is recommended for 18-24 months, so it’s right at little C.’s current learning level and it’s great for developing his motor skills. Now, if only he would stop trying to drag it on and off the couch…
P.S. little C. is changing every day – you just wouldn’t believe it! His fav shoes are still his Crocs and wears them to his little gym class each week. He’s starting to eat cheese sandwiches now, and I’m persistently trying to wean him to a straw (not working, so far…). He sleeps alllll night (well most nights…) and loves to pick out his t-shirt for the day. That’s my boy. 🙂

Wedge-Heel Booties are Back for Fall! Whiny Wednesday: Baby2Baby Events Brings Out Celebs